With the sea on one side and the jungle on the other, I knew I had found the perfect place for my wildlife adventure at Jetwing Yala Tented Villas, on the jade pendant of the Indian Ocean. Sri Lanka, a tropical island is home a wide range of wildlife and the park that I visited in particular, i.e. Yala National Park, happened to have the largest population of leopards in the wild! The best and only way to get a glimpse of nature’s real beauty is by exploring the wild – and not in zoos! Whether you’re in Sri Lanka for a long weekend or 2 weeks, Yala is a must-visit stop for every itinerary!

This is a guest post review of Jetwing Yala Tented Villas written by Gillian from ImperfectTraveller.

Where is Yala National Park?

Yala National Park, as mentioned above is not only home to the elusive leopard, but also a haven for plenty of other wild animals, from elephants to crocodiles and wild boars to sloth bears! So you can imagine my excitement when I found out that Jetwing Yala was located on the border of this protected reserve. Yala National Park covers approximately 979km2 of land comprising of thick forest, grassland and lagoons, making it the ideal habitat for the species mentioned above and many other. It’s by far one of the most beautiful destinations in Sri Lanka.

Getting to Yala National Park

Located in the southern city of Hambantota, Sri Lanka, Yala National Park is accessible only by safari jeeps with a valid permit. However, getting to Jetwing Yala from a closer southern city like Galle was much easier for me. I booked a taxi service from Jetwing Lighthouse, Galle for the transfer to their sister property in Yala. So there was no hassle there! It took approximately 4 hours by road, so trust me, when I say, get a comfortable car!

If you ever want to sleep on a comfortable bed with wonderfully cloud-like pillows but wake up to a view of the island’s jungle, this is THE place for you. This is one of the most unique places to stay in Sri Lanka, and a must for adventure seekers. I treated myself (and surprised my partner) with a beach side candle lit dinner and it was impeccably organized and romantic. The hotel also has a pool, and it’s great for those perfecting that summer island tan, because unless you’re under the shade of a pool umbrella, there’s no shade from the beating sun rays. Carry lots of sunscreen! I went through at least half a bottle within 2 days. There’s also a spa, gym and billiards table (which I didn’t use, but I’m sure they were fab. 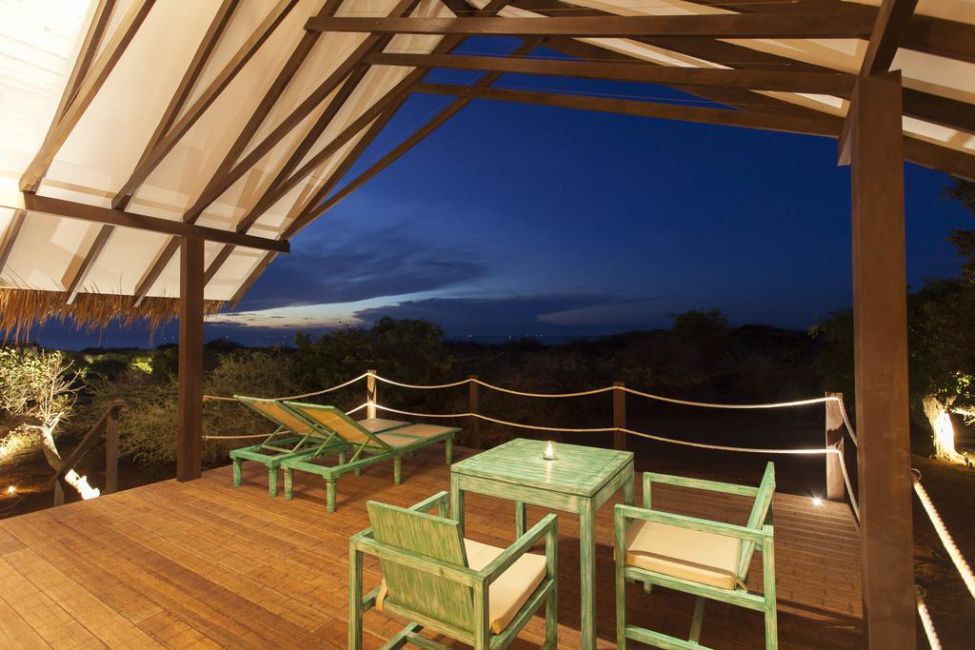 The safari – part one

My first time on a safari and I was ready to see at least 5 leopards, herds of elephants and any other animal just walking past my jeep – similar to African safaris in movies. The jeep picked up at 5:45 am from the hotel – Yes, I did indeed wake up that early, even after inhaling a bottle of wine and a 5 course dinner. Slightly groggy but with a spring in my step, I climbed into the dark green jeep with a canvas roof. We were advised not to carry any food (water was okay), into the jungle as the odour might attract animals and would interfere with nature, according to our hotel’s nature expert at least. By 6 am, we were at the entrance to the park and ready to set forth in search of wildlife!

Animal adventures
Our first sighting was a herd of elephants, they looked rather adorable, and I have now a keen fascination for these gentle giants! Walking at a snail’s pace, these elephants didn’t have a care in the world and were seemingly the least bothered by our presence, so long as we maintained a good distance from them and didn’t cause any ruckus. Moving on and until about 11 am, the only animals we were blessed to see were wild boars, deer, peacocks, 2 sunbathing crocodiles, and dozens of birds! Sadly, no sighting of a leopard. We set back to our hotel and were informed there’ll be another evening safari and the next day, a morning safari, but the jeep would leave slightly earlier this time so that we could be the first in line at the gate! It sounded exciting, so I agreed to the morning safari (I was too exhausted for the evening safari!).

Time to relax
At the hotel, I spent the rest of the afternoon, cocooned in the blankets and ordered room service. A dip in the pool after 4 pm was rather relaxing. I had an early dinner this time, with a glass (or three) of wine this time and headed to bed, determined to wake up at 5 am. 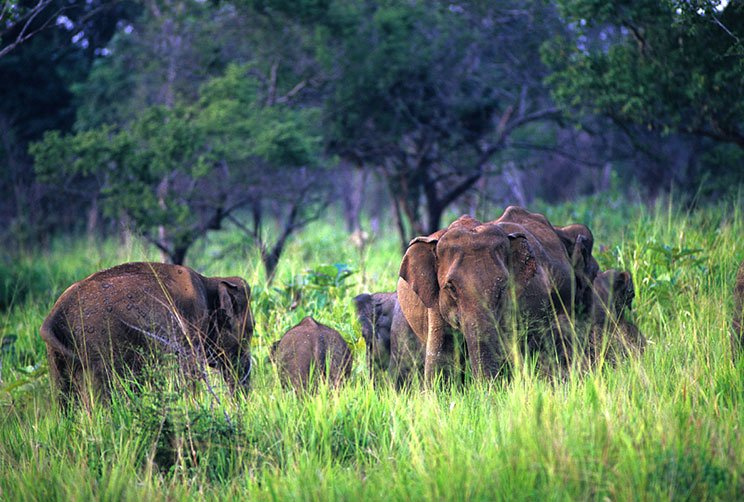 Have you heard of the phrase “the early bird catches the worm”? By waking up at 5 am, our jeep was the first in line at the park entrance and just as those majestic iron gates opened, we headed off again in search of the elusive leopard. Not even 5 minutes into our adventure, we saw him! Slender and sleek, majestic and bold, cautious and ready to attack, a mighty leopard in our path. Our jeep halted to a quiet stop and we were all silent. Silent enough to hear the dry leaves crunching under his paws! I was in awe, and it’s the first time I saw my partner without a thing to say!

The moment was short-lived though, as the leopard sensed the hoard of noisy jeeps making their way in our direction and dived into the forest, never to be seen again. The guests on the other jeeps were rather disappointed and we had a rather smug, accomplished look of being the only ones in the park to have spotted this beautiful creature! We weren’t too bothered to spot the other animals in the park, because nothing could top that experience! We gleefully headed back to our hotel by 10 am.

Your best bet is to let your hotel organize the safari for you. Avoid using the jeeps parked along the roads, as most of them get reckless inside the park with no regard for animal welfare.

You are most likely to see leopards when you embark on a morning safari, as they tend to disappear in to the thick jungles when the sun comes out to take shelter from the heat. Be at the park’s entrance before 6 am.

When to go to Yala National Park

The months between May to October are the best to see wildlife. Avoid public holidays and weekends as much as possible, as the park gets crowded, which means there’s a less chance to spot leopards or wildlife.

If you’ve got time to spare, go diving to the Great Basses Reef in the nearby town of Kirinda or visit Sithulpauwa, a monastery located inside Yala National Park, built during the 2nd century. Or consider going back along the coast and spending a few days in the UNESCO world heritage site of Galle.

Bansko Ski Resort After the Snow: Summer in Bulgaria