Life After Death in Toraja, Indonesia – Tales From The Grave 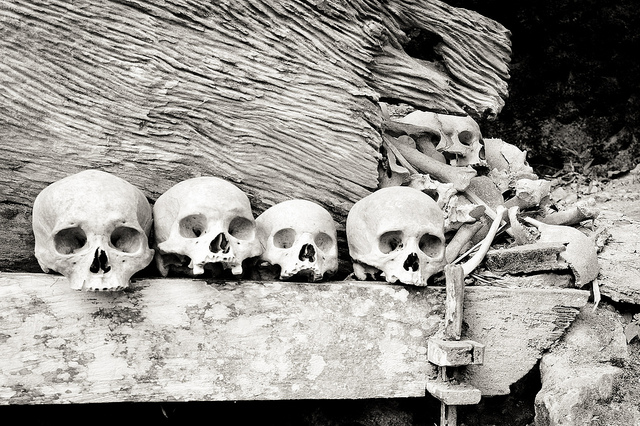 I’m on all fours crawling through a dark and damp cave in Toraja, Indonesia. There are open coffins lying on the ground in front of me and two skulls side by side to my far left. It has been an intense day of learning about the Toraja people but nothing could prepare me for a cave turned graveyard with stories that would haunt your soul.

The two skulls in front of me belong to two young lovers. Blood related, their families forbid them to marry and so the young couple hung themselves side by side, in the hope to be together in afterlife. Now their skulls, bodies and no doubt spirits sit side by side in this mass cave graveyard in rural Indonesia.

As I get back on my feet, careful not to bang my head or to accidentally steady myself on some stray skulls or bones, I notice an open coffin full of cigarettes. In any other nation it would be highly disrespectful, but I am assured the man loved to smoke so his family always make sure he has enough cigarettes to smoke in his afterlife.

Our young guide, a family member to many of the deceased, tells me that even visitors and tourists leave donations such as packets of smokes or even bottles of coke. One coke bottle lies empty on the floor. “But who drank it?” he asks suspiciously.

The Toraja people came to Indonesia from South China over 4,500 years ago in traditional, carved wooden boats. When they started to build their homes, these structures were all that they knew so they designed their homes based on them. To this day the region is famous for the uniquely shaped boat houses, perches high on thick wooden, stilts. 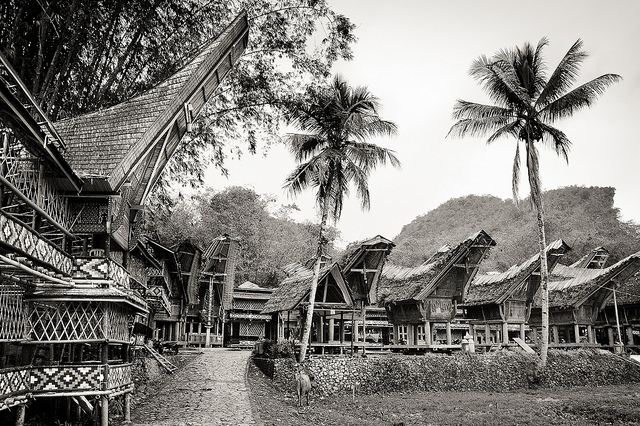 A traditional society with a tight-knit community, it is home to many rituals unknown to the rest of the world. Depending on their religion (mostly Christian and some hold on to the ancient religion of their ancestors) they have different burial procedures and places.

Earlier that morning we were lucky enough to be invited to a grave cleaning ceremony. A far cry from your typical tourist attractions, it was a privilege to be invited to such an intimate and unique ceremony. As we gathered around a small area with the extended family, we watched as they opened up small caves carved into huge boulders, and careful carried the wooden and cloth coffins out and placed them on the ground. Family members then went on to open up the coffins, inspect the skulls and bones, and identify each family member from the cave grave. Names were written on the coffins, old clothes were exchanged for newer ones and partners, sons, daughters, and even grandparents got a glimpse of their loved ones.

The caves themselves are also cleaned out and prepared for the coffins to be put back in. There was one exceptionally small bundle of cloth with twine wrapped around it. A baby, less than a year old, we were informed. Strong believers in afterlife, these ceremonies (which only happen once every 3 years) are not sad events. The whole family gets involved, flying in from other parts of Indonesia to be there. In Toraja culture, the funeral is the most important event in one’s life, followed by one’s wedding. All other events are not held with the same prestige as death.

Back at the sky-high cave graveyard, where the wealthiest are buried at the top of the cave and those with less money at the bottom, our guide starts to explain what needs to be done before one can be places inside. There was a line of wax-like figures, carved out of a jackfruit trees, to represent each person that has been buried here. To make just one of these burial dolls, the family needs to sacrifice 24 buffalo – a massive sacrifice for a single Indonesian family. These dolls and carved figures are known as “Tau Tau” (tau being the Toraja word for human – tau tau meaning “double human” or double life, symbolising another life after death. 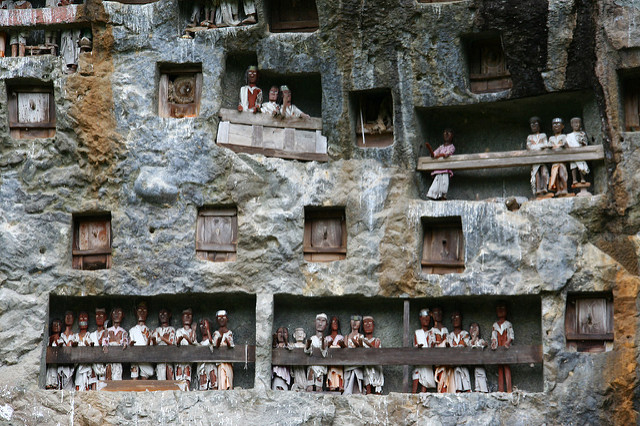 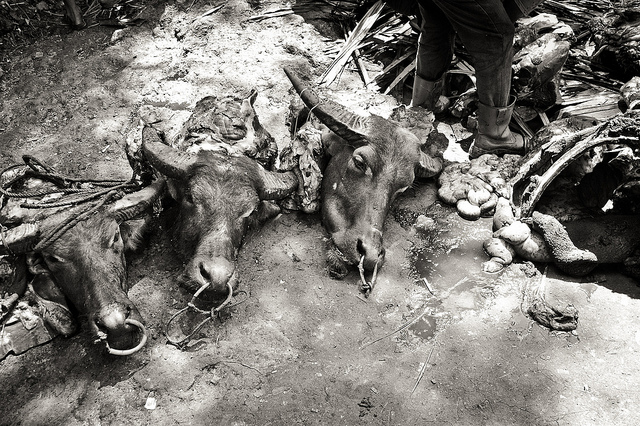 Out of respect and to make his generation proud, the tradition of sacrificing the buffalo has been long-established for hundreds of years. Once one family member has made the sacrifice, the rest of the family are not obliged to do the same. Poorer families who cannot afford to sacrifice buffalo have to give one pig in order for their bodies to be put in the cave.

Before death comes life, and the Toraja people know how to celebrate both. We were lucky enough to witness preparations for a large wedding in one Toraja community and it was heart warming to see the entire community come together to prepare. Up to 100 women sat in the shade preparing the food; be it cutting up vegetables, cooking rice, preparing pork and chicken satay or cooking enough fish to feed the entire wedding reception.

Meanwhile 20 men sat around under the shade of a tree hacking up 5 whole pigs, then passing them to the women to be prepared and cooked. Some other community members build a wonderfully colourful makeshift stand for the bride and groom to sit under during the ceremony while the community elders prepared for the ceremony itself.

Wedding preparations, grave cleaning and crawling on all fours through a cave full of coffins were not exactly what I had in mind when visiting Indonesia, but the entire experience now remains one of my fondest memories from a trip full of culture and tradition. After all, it’s the people that make a trip…dead or alive.

Special thanks to the Indonesian Tourism board for hosting me on this incredible 10 day Trip of Wonders. As always, all insights and opinions are my own. :-)

Cover image credit: Vampirogordo / Flickr. Additional thanks to The Flyaway Girl and Yuki for letting me use their photos from yesterday.

Cantina Romanese: The Trentino Winery With A Heart-Warming Story

Magical Places To Visit in Ireland For Your Irish Bucket List

Fun Day Trips From Bern Switzerland - Escape To The Alps