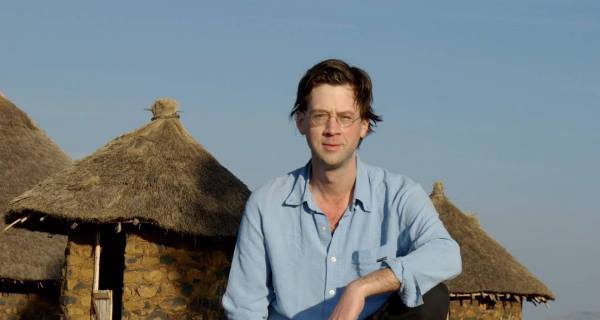 From riding in the back of an ex-army truck across Africa to battling rabies and drinking his own Urine, Irish travel writer and presenter Manchan Magan is not your regular D4 head!

He may have grown up in Donnybrook but he is living a life far removed from the world of Yummy Mummies. He could speak Irish before he could speak English and despite being the great-grandnephew of nationalist “The O Rahilly” he has always felt disconnected from Ireland.

“I never connected with the world I was brought up in and it left me feeling depressed in my teenage years”, he says.

He is talking to me via Skype from New Mexico, where he is currently helping with the Obama Campaign. Never a dull day I would say.

At the young age of 20 he embarked on a trip of a lifetime. He brings me back to a young, innocent Manchan Magan about to begin his first ever adventure; an epic six month trip from London to Nairobi in the back of an ex-army Truck with 18 unlikely adventurers from 2 privately educated schoolgirls to a locksmith who claims to be a UFO-abductee.

Magan holds back nothing when describing some of the hilarious, eccentric, and shady characters he travelled with, which he explains is why he waited nearly 20 years to publish it.

On this first trip across the Dark Continent he encountered witch doctors, drug runners and missionaries. He talks about hitching with dessert nomads in Morocco to being stranded in the middle of the Congo with no food and no money. He was looking for some romance and compassion but all he got was an infectious disease.

“When I returned home with Bilharzia, the doctors here had never seen it before and were entranced by he tests”, Manchan recalls.

“The doctors in the tropical medical bureau out in Dun Laoghaire couldn’t hide their excitement. They seemed to forget my life was in their hands! A new cure had just been released and the Irish government was obliged to use me as a guinea pig to try in out and I was cured within days.”

As I listen to Manchan talk about his travels I can’t help but smile. I can immediately sense his passion and love for the places he has been. That is until I get him talking about his years at a student in UCD, where he studied Arts for 3 years.

“I promised my mum I would go back to College so it was only for her. I was disgusted by how little I had learnt in 3 years in UCD compared with everything I had picked up in Africa. It was my travel experience that created me!”

“The trip I enjoyed the most though was my time in Ecuador”, he tells me. As he reached the Valley of Longevity he realises he had reached a place he could call home. Here he settled down for 7 months where he worked at an organic health spa.

“I also had no choice but to stay put as the Doctors there were treating me for Rabies”. Honest as always.

From running a spa in Ecuador to living in a cave and befriending a gay Leper up in the Himalayas, Manchan has had no shortage of diversity in his life. It was here, high up in the mountains, that Magans brother Ruan came to rescue him.

“I was living the life of a Hermit and had lost all communication with the outside world. I had become delirious living on my own Urine so when Ruan came along with the camera it was the only thing I could talk to.” It was from here that Manchan Magan became the renowned travel presenter he is today.

Now a full-time writer, broadcaster and TV presenter he has a travel column in the Irish Times, regular slots on RTE radio and has made over 50 documentaries worldwide. Yet Magan says he is sticking to his Idealistic ways. He lives in a house made entirely of straw surrounded by his self planted forest in Co. Westmeath.

“I got the idea when I was living out in British Colombia for a few years. I needed to find what I connected with in life and ended up living in a hippie commune where everything was environmentally sustainable.”

I ask him his plans for the future, and he tells me he plans on following his heart…right back to Africa, where all this madness began over 20 years ago. Another crazy adventure awaits for Manchan Magan.

5 things NOT to do in Portugal

10 Best Places To Visit In Ireland