Tales from a late night JimJilbang

On our weekly adventures in Hongdae recently (that’s the hip and happening nightlife district of Seoul, for those not in the know!) I have been fading early and am no longer able to pull those all-nighters like I used to. I must be getting old! The thought of staying up all night and then having to face sitting on a crowded train full of other drunk, tired and often queasy revellers for over an hour is FAR from appealing!

Instead of booking into a hostel or hotel like most normal people, or making friends with some randomer who lives in the area and pleading to crash on their couch, I have instead opted to spend the early hours of most Sunday mornings sweating it out on the floor of a Korean Jimjilbang!

First, for those not acquainted with Jimjilbangs I better give a quick explanation about these magical places. A jimjilbang is a large, segregated Korean bath house full of an array of hot tubs, traditional Korean saunas, massage tables and showers. For most Koreans, it is part of their weekly beauty ritual and involves going to the Jimjilbang with either friends or family and spending hours washing, bathing, and scrubbing their bodies in order to get super smooth and healthy looking skin. All wet areas prohibit the use of clothing for safety reasons (apparently with the extreme heat of the baths and steam rooms, it is believed that toxic chemicals can leach out of apparel and into the body. Oh and it is also believed that if you wear a swimsuit or cover up you may be trying to hide a disease!)

Once out of the bathing area, the many saunas can help to clear out your pores, empty your body of bad toxins, and can help you de-stress and relax. Depending on which Jimjilbang you go to, and how much you pay to get in, will determine the quality and quantity of facilities inside. Some of the 24 hour jimjilbangs around Hongdae are pretty basic and don’t even have saunas while other big one’s such as Dragon Hill and Siloam Sauna near Seoul Station have up to 5 or 6 floors of facilities including a restaurant, entertainment area, hair salon and an abundant number of sleeping rooms and saunas ranging in temperature from an “ice room” to a 96’c “fire room”! You could easily spend a whole day here wandering from sauna to sauna. 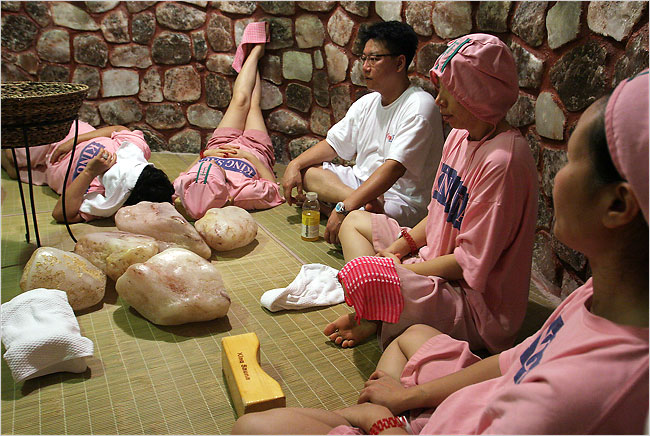 I have had MANY late night jimjilbang experiences in various parts of Seoul, but for me nights spent in the 24 hour jimjilbang near Hongik University station in Hongdae are always the craziest. The last time I stayed there was so bizarre I’m going to share the experience with you, step by step!

I left the wonderful FF’s club at around  5am. I could have forced myself to stay awake one more hour and caught the last train home but that was simply not an option I fancied. I was physcia;;y exhausted from my full days shopping, my disastrous Korean hair salon ordeal and a night of fun and mayhem hanging out in Iteawon and later hongdae with various groups of friends. I headed to the 24 hour “Happy Spa Place”, which was only a 5 minute walk from FF’s, paid 9,000 won (about 6 euro) and was given 2 small towels. some pretty gaudy looking pink PJ’s, and a key for a locker. I was warned it was pretty crowded but didn’t care..all I needed was a tiny corner to lay town and pass out.

They weren’t lying. As I took off my shoes and entered the tiny changing room/locker room, there were bodies ALL over the ground. It was quite the challenge to tip toe over them and around them. While most were passed out, all wearing the lovely matching pink PJ’s which I had been given, some where sitting butt naked in front of full length mirrors drying their hair, others were wandering around, also naked, except for tiny towels wrapped around their head on their way into the bath house.

I quickly changed into my PJ’s, bought a disposable toothbrush from one of the old ladies sitting  who was sitting comfortably on a massage chair twice her size, washed my face and managed to curl up in a ball on the ground next to the sinks…the only available space I could find!

About 2 hours later I was woken up by the same toothbrush selling Ajamma, who was shaking me and shouting at me in Korean. I was startled and asleep and drunk and had no idea what was going on. Apparently I was “in the way” so she made me lie down on a nearby table and told me to sleep there instead. I obeyed and within minutes, although slightly confused, was fast on my way back to sleepy land.

Less than an hour later, a different scary looking Ajamma woke me up by practically pushing me off the table…apparently I was in the way again. It was now 9am and many new people had arrived, while most of the others had either gone home. I decided it was time to, temporarily, get up and check out the public baths that were on offer. The first thing I was greeted with were rows of seats and showers, where you can sit down and scrub yourself til your black and blue. Honestly many of the Korean women I saw here were sitting by this shower for up to an hour scrubbing themselves, washing their hair, shaving, washing, scrubbing, and other stuff I’m PRETTY sure you don’t want to know about.

I opted on a bath that was 40’c tostart off and slowly worked my way around to the hotter baths bit my bit. The bath house was pretty empty which means these GIANT hot tubs were all mine. It was  bizarre feeling sitting in this dark, dimly lit public bath house, situated underground in the middle of Seoul’s top party district, realising I was butt naked in a bubbling pool of magic and with not a  care in the  world apart from the impeding hangover which was fast approaching.

After half an hour I headed back to the changing room and decided to lie down in a different, more secluded corner, to get a few more hours sleep. I was again woken my an ajamma but this time she simply woke me to put a soft pillow under my head (I had been using a wet towel as a pillow!). She smiled down at me, then walked away. Eventually I forced myself to get up at around 11am at which stage the jimjilbang was seriously busy, with a lot of fresh-faced Koreans arriving to spend the day pampering themselves before the work week that lay ahead.

I changed out of my pink PJ’s, got dressed, returned my keys to reception and decided it was about time I headed on home. :)

Korean kids sticking their finger up…

CouchSurfing in Korea can get you FIRED

Am I Getting Abducted?! Tales From My First Half Marathon In South Korea!

Big is Beautiful - Except in South Korea