Having spent twelve months living and teaching in the rural village of Mararaleng Ga -Mphahlele, in the Limpopo Province of South Africa for my Gap year, I look back at my first impressions and realise how much things changed throughout the year.

The journey to school every day was along a ‘road’ made of thick red clay. It was the bumpiest, scariest and eye-opening journey I have ever taken. Travelling in a mini bus taxi, with a grandmother and her kids on top of me, occasionally a monkey jumping over me and the dust from the road smoking through the hole in the floor, I held on for dear life as the driver swerved to avoid a stray goat.

Finally we arrived at the school; what a shock. All I could see was two derelict buildings, some collapsed toilet buildings, beyond which lay barren land, the odd grass snake and far off mountain ranges. The next thing that (literally) hit me was how hot it was. The normally refreshing breeze felt as hot as hairdryer air and seemed to blow sand through the windowless classrooms, over my clothes and into my eyes. 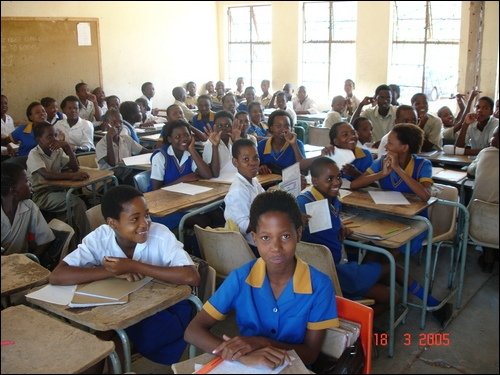 Arriving on a Monday morning we immediately witnessed our first assembly where all the students lined up in the yard under the morning sun. It was hard not to notice the staring. It was as if I had just arrived from Mars or Venus. The children had never seen white people before. There were plenty of whispers and giggles, and I made out the word machua, meaning white person in Northern Sotho.

Suddenly a girl at the front began to sing creating the most beautiful gospel hymn to which everyone joined in thanking God for the rivers and the mountains, letting him know how very grateful they were. It was the most inspiring yet the most heartbreaking scene. At that moment, with tears welling up in my eyes and a pounding heart, I found it near impossible to act appropriately like a strict new teacher.

There I was in front of 320 students with broken shoes and torn shirts, yet every last one of them was smiling and content. It was the most uplifting moment in my life thus far and made me realise why I was in South Africa and confirmed how much my presence would be appreciated.

(This video is not of my students but the singing outside at assembley is the same!) 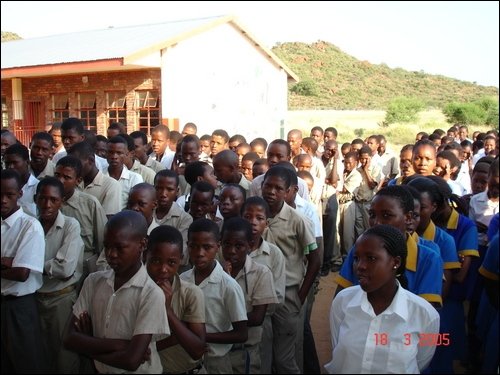 Assembley outside the school

The very first class I took was terrifying. I had no idea about the syllabus or the ability levels of the students and walked into a class of 93 staring 14 year olds. There was a palpable nervous excitement – the ‘new white girl’ was their economics teacher. I explained what I was going to do and spent one hour teaching them management skills until one brave girl raised her hand and said in broken English “Miss, we understand no word that you say, please speak slow”. However, as Irish girl I always spoke too fast! My year teaching there would be a challenge beyond belief.

The students are what make Lehlaga such an amazing place. Never in my life have I met a group of teenagers who smile and laugh as often as they do. Their enthusiasm and the effort they put into their work astounded me. The dreaded feeling of nervousness I had before class began soon disappeared as I realised how sweet and helpful my students were. 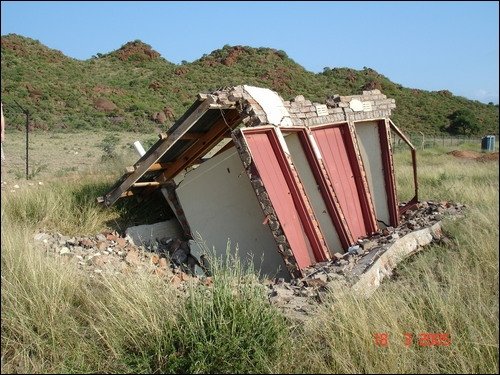 Week by week my students’ grades improved. My confidence grew, their knowledge of English improved and the school itself went through many changes. Once I put my mind to it and had the students behind me, it seems as though we could do anything. We decided new toilets were needed urgently, so we came up with five projects to raise money: Grade 8 set up a tuck shop and planted an orchard and vegetable garden; Grade 10 improvised and made a blue peter style classroom; Grade 11 printed t-shirts using my digital camera, before selling them for a profit. Together we wrote articles to be published in Irish newspapers, asking for fundraising assistance.

Learning a skill or owning their own business is their only hope. With 70 per cent of the village illiterate and unemployed; there is little money and little chance of attending university. Our days were busy and stressful but always rewarding. The students’ work ethic, their motivation and willingness to learn astounded me.

Their apparent love of learning was inspirational, pushing me to help them as much as I could in the short time and with the few resources available to me. They taught me more in a few months than I learned in six years of secondary school. I not only saw them as my students but also came to regard them as some of my closest friends.

I strongly recommend taking a year out to everyone. If you can touch just one person’s life, you will return home knowing you have made a difference. The more you put into it the more you get out. I realised that those students helped me in ways that I could never help them: they taught me how to love and how to appreciate all that I have in Life.

There is a world out there for every last one of us to explore and to be a part of. There are cultures to experience, languages to learn and people to meet and to love. Don’t put it off: make those plans a reality!

Offbeat Places To Visit in Bhutan : A Buddhist Kingdom In The Himalayas

Food in South Korea: The Good, The Bad and The Ugly

Korean kids sticking their finger up…